Even though I live ten minutes from the park entrance and occasionally work at the gift shop there, hiking is rare perhaps because I have more than twenty acres of my own for hiking.  My son came to visit for ten days during this holiday vacation.  He brought his mountain bike and spent every day the past week mountain biking the park’s numerous trails.  Last week and yesterday, New Year’s Day, I went along and hiked.  The following photos and comments are day one’s experience.

For those familiar with the park or who may want to go there, we parked at Chinaberry.  I decided to cut across to the east and found a trail.  It was not until several days later that we figured out the trail’s name mostly because this trail in not on any map provided by the park or on the official park website.  The trail is Comanche.  It is the longest trail in the park.  If you go to your browser and type in Comanche Trail in Palo Duro Canyon State Park, you will come to a mountain biking website that shows the trail in some detail even with a virtual tour.  The trail is occasionally marked with signs that say Comanche Trail but since it does not appear on the official map, I found it somewhat confusing until I found the above mentioned website. 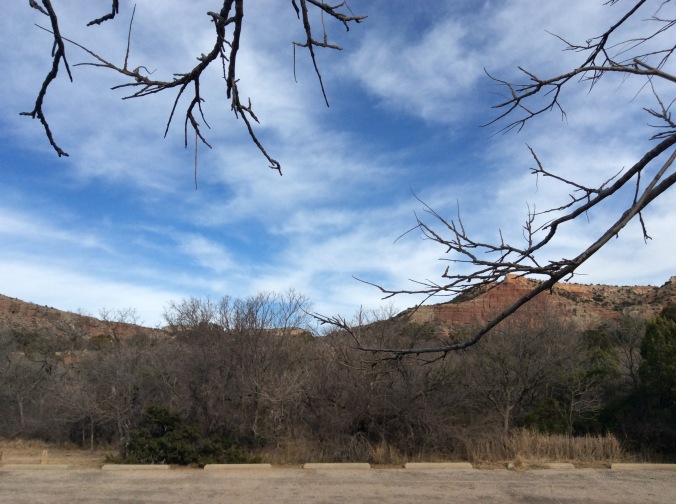 I took this photo at Chinaberry, a parking and picnic area from which several trails start. 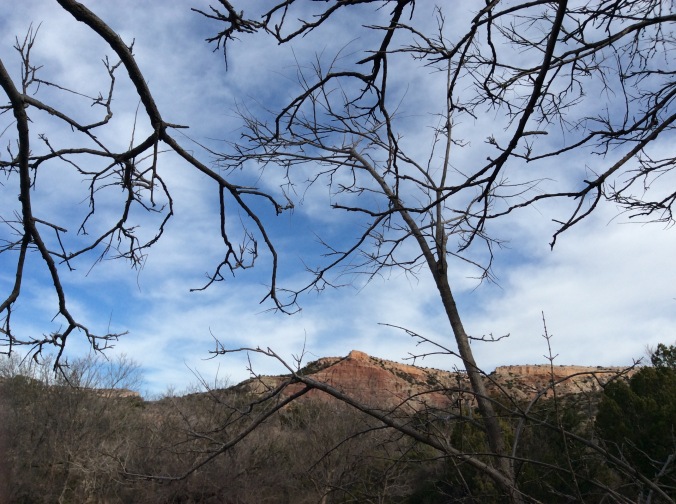 Day one I had not seen the marker for Comanche partly because it is across from Chinaberry at the very north end.  I planned to head for the peak in the background, thinking I would hit a certain trail–it was not the one I found because Comanche is not on the map. 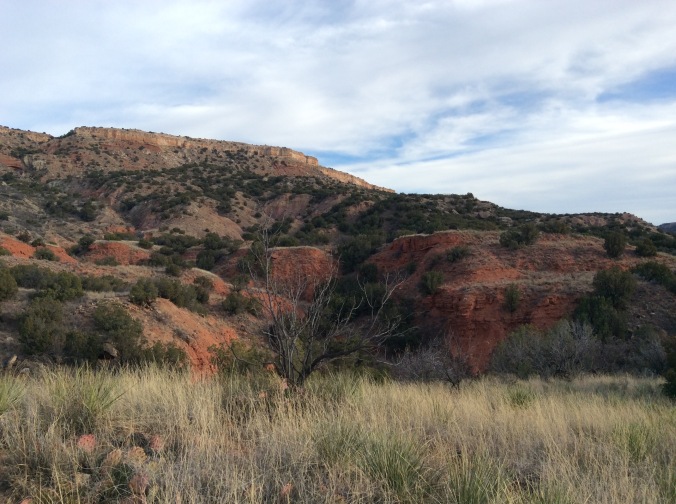 The grassy area before I found the trail. 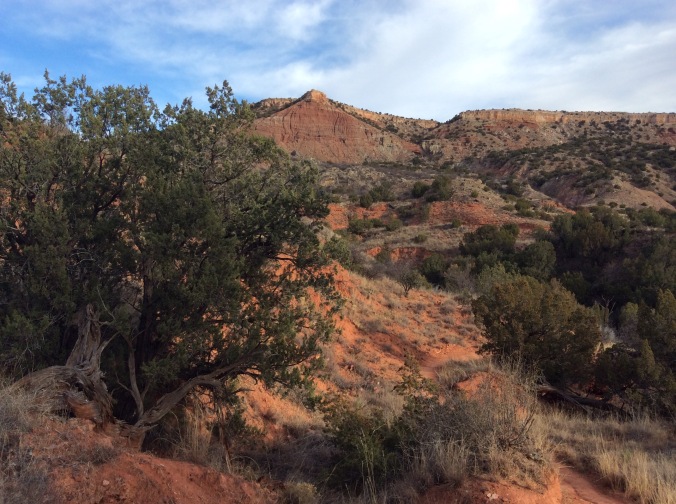 You can see the trail by the grass on the right. 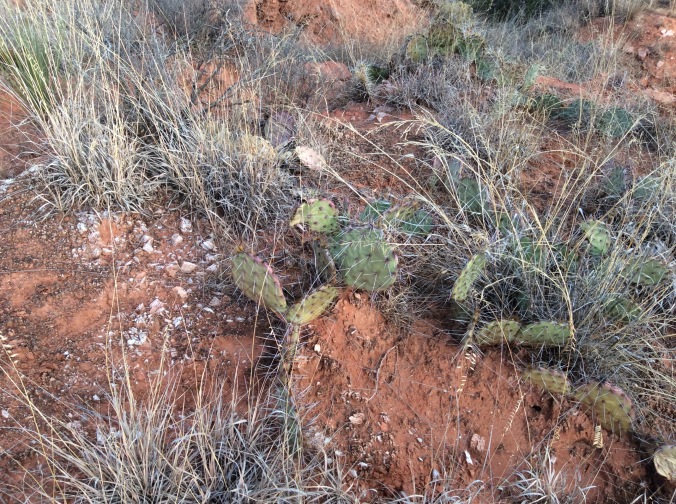 This is prickly pear country.  There are numerous species.  This is important for mountain bikers more than hikers.  Tipping over into a prickly pear patch would not be a pleasant experience. 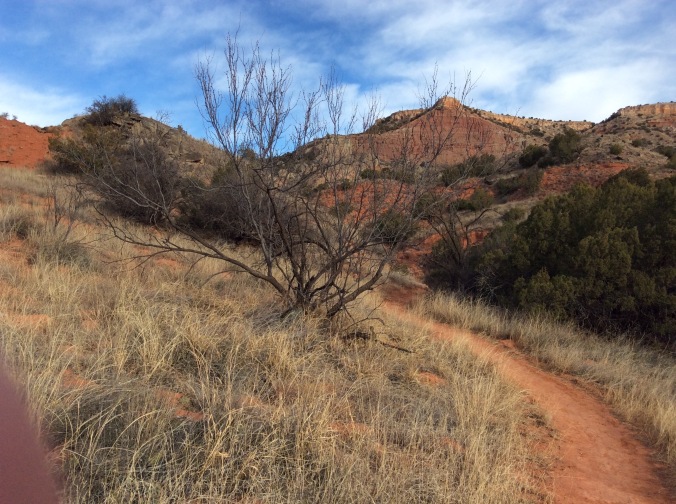 Here the trail is easy. 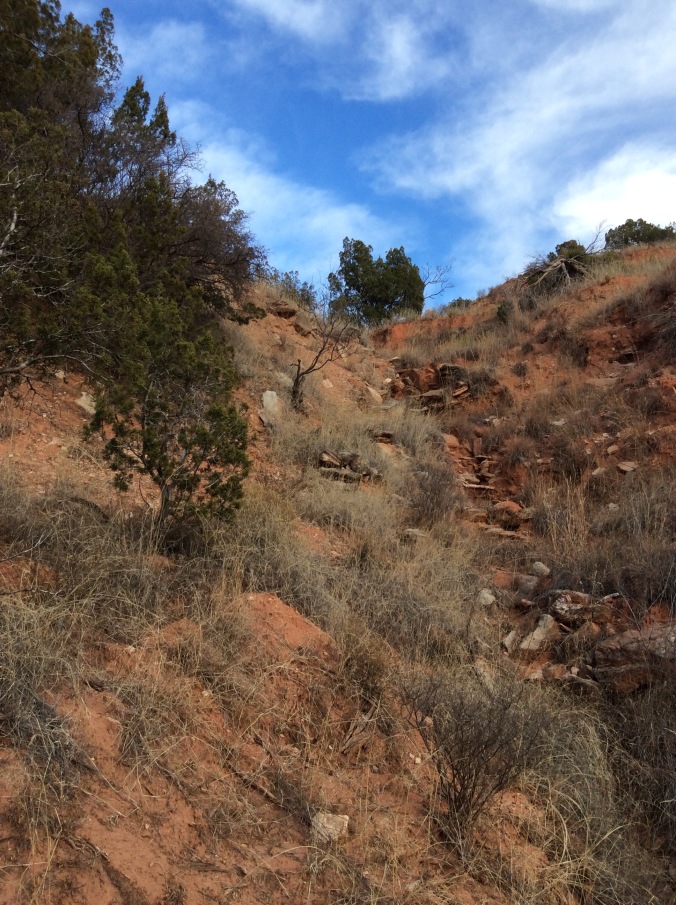 I started my hike around 3:30, a big mistake, but I did not know this yet.  Numerous stream beds occur along the trail. 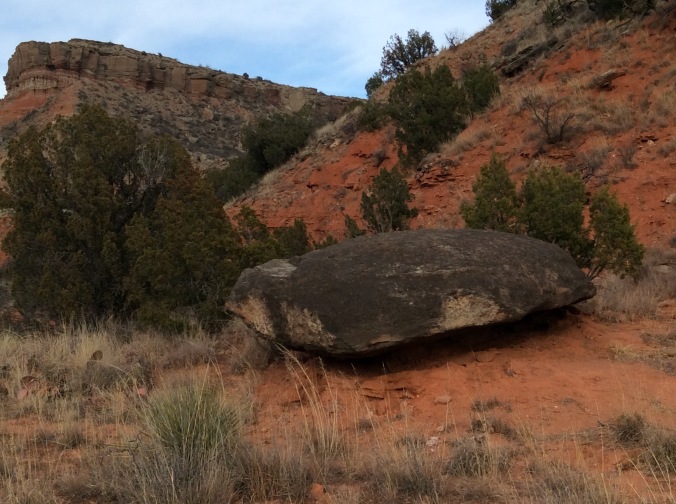 At this point another trail diverges to the left.  Here giant grey boulders appear everywhere. 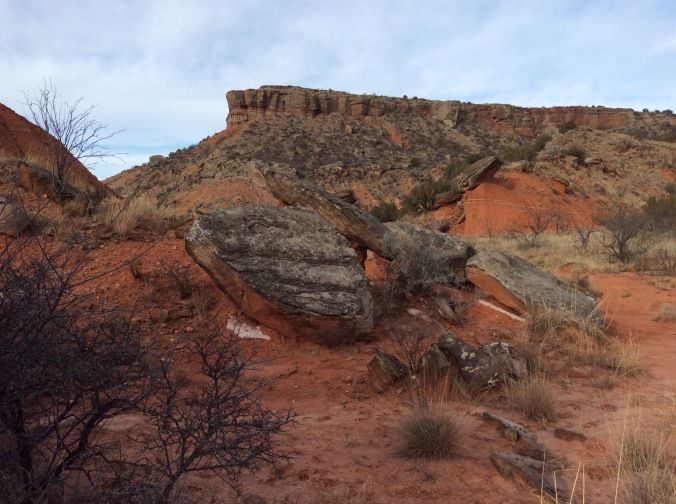 I decided to take the trail to the left to see where it went, all the while thinking I was on one trail when I was on another. 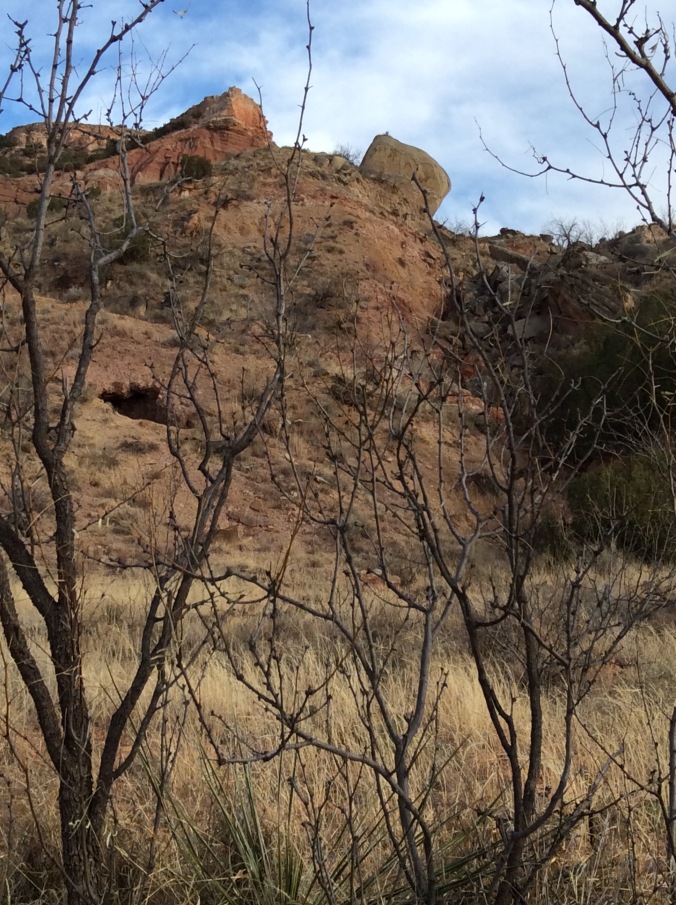 When I looked toward the opposite direction, I could see this small cave. 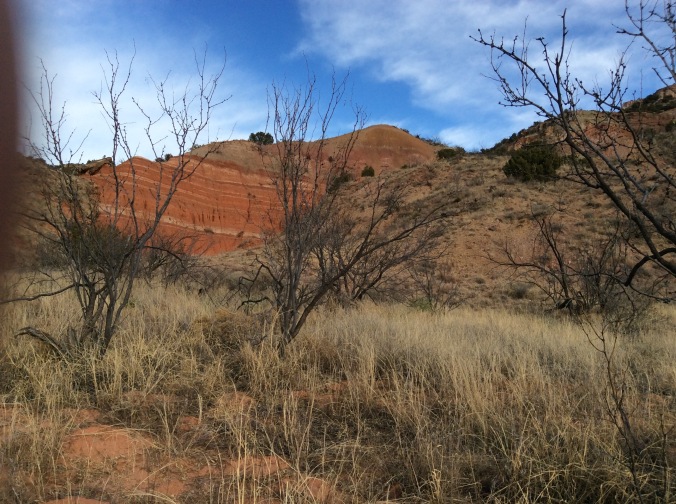 A view from the trail to the left. 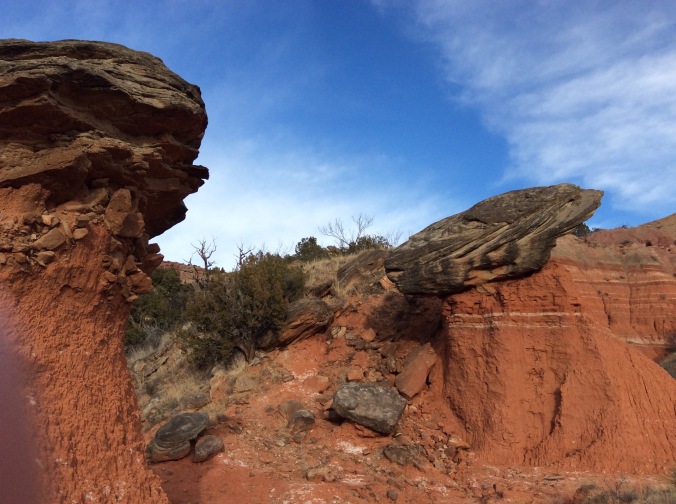 The same giant rocks looking back from the “new” trail. 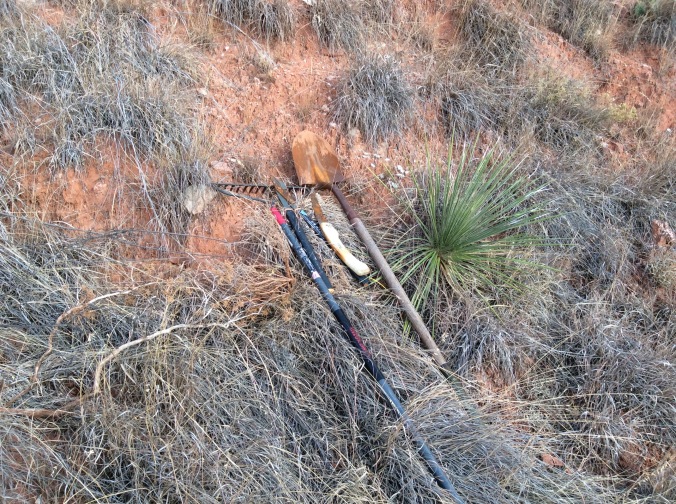 After hiking down a rather steep incline with tiny orange flags along it, I came across this. It appears this is a new trail in the making.  Yet, given the rust on the shovel, I thought perhaps the trail blazers had just carelessly left their “equipment”. 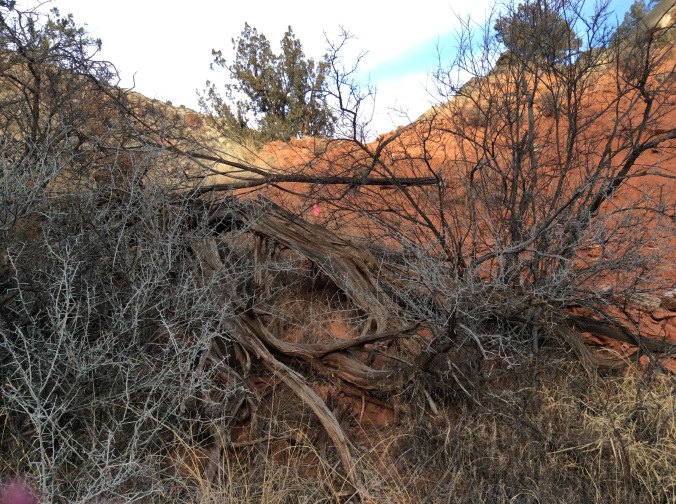 At the bottom of a little draw ready to climb back up the other side.  You can see one of the little flags in the middle of the photo. 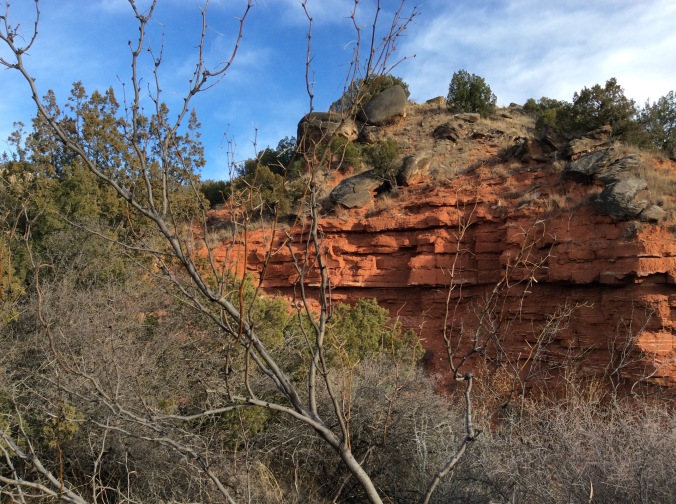 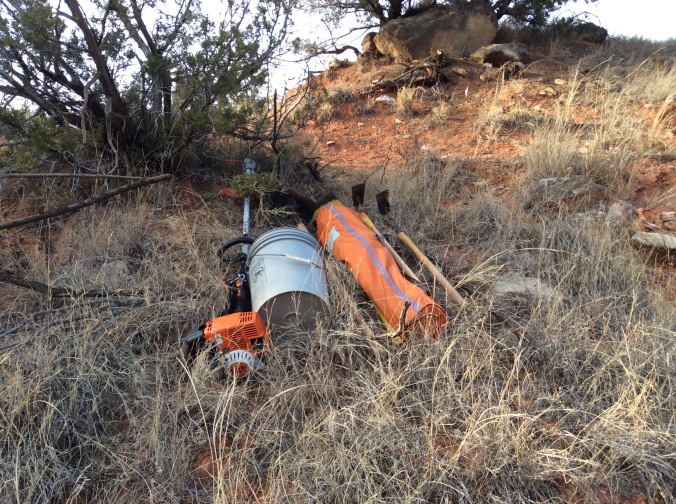 On my way up the other side of the draw lay more equipment.  When I went back New Year’s Day, this had all been moved to another spot. 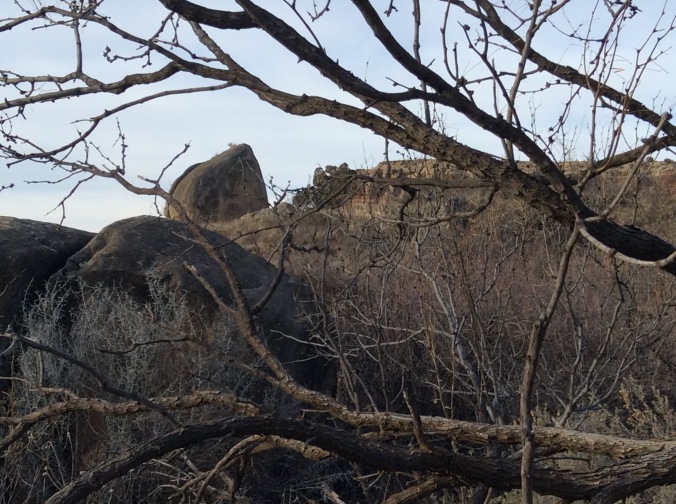 Different rocks looking in another direction. 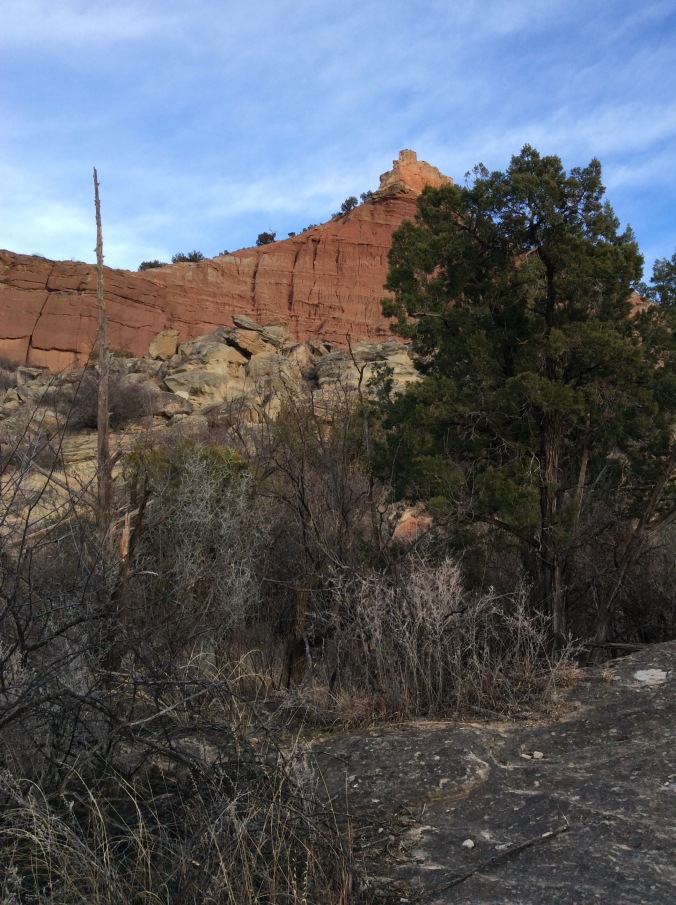 Back on Comanche Trail (even though I had yet to know its correct name and thought I was somewhere else) headed south.  This was just before I realized just how far I had to go and how little time to get there. 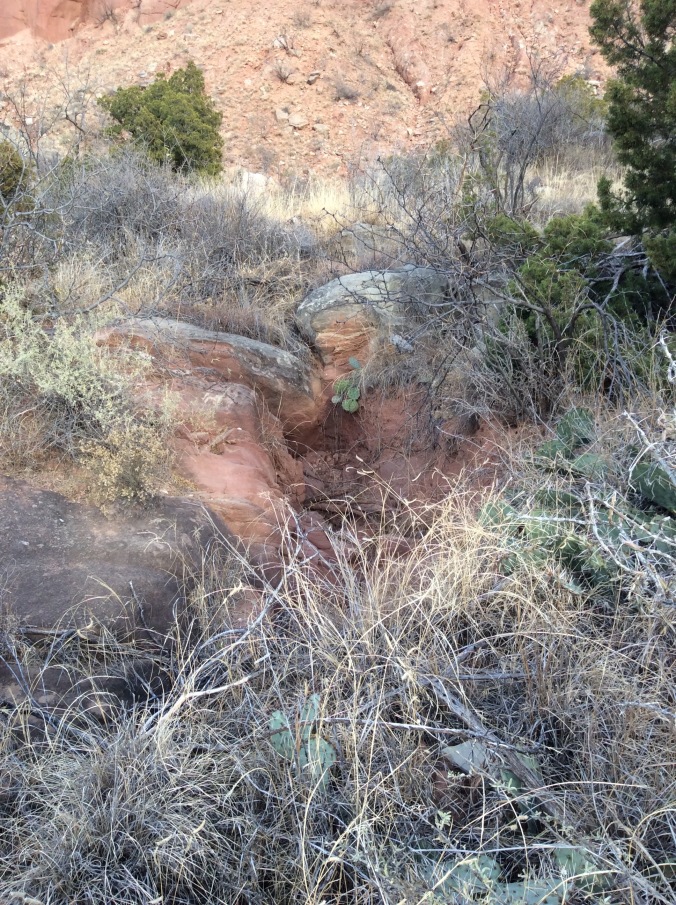 Little areas like this are everywhere along the trail.

It was shortly after this point that I saw two women–this trail has few hikers or mountain bikers on it. They were the only people I saw for miles.  When I asked them how far to the other end, I realized I was in “trouble”,  not real trouble like lost, but rather trouble like I was supposed to meet my son at Chinaberry at 5:30, and I was not even half way on this trail and I still had to get to the bottom.  I realized where I would come out; I would intersect another trail called Rock Garden and would have to go one mile steep downhill.  Unfortunately, I had not taken my phone because I did not think it would work there and had no way to inform him.  I also realized it would be nearly dark when I got to the bottom.  5:30 came and went and I still had quite a way to go. I quit taking photos and ran when the trail permitted and walked as fast as possible when it was too rocky or steep to run safely.

I took this photo on my way, hiking the several miles toward Chinaberry.  Luckily, I met a nice couple who offered to stop by Chinaberry and tell my son where I was.  Unfortunately, I had the vehicle keys and he could not even get in his own vehicle.  The light to his bicycle was in the vehicle so he had to ride down the road in the twilight to get the vehicle keys.  I kept walking.  I was just glad he had waited and I met the couple because an unneeded rescue would have been terribly humiliating.  We made it home safely.

My Fitbit told me I had walked more than 11 miles that day.

Raised on a family farm in Northwestern Missouri, I became a singer, college administrator, corporate manager, educator, and author. My first poem was published in a statewide anthology when I was in high school. I am a former member of the Board for the Story Circle Network, a group of women dedicated to women telling their stories. I have a Ph.D from The Ohio State University and a B.A. and M.A. from the University of Rhode Island. I have taught high school English and Spanish and raised horses in the Panhandle of Texas. Now, I sing, write, garden, cook, and wander in the San Gabriel Valley in LA County, California. My memoir in poetry "On the Rim of Wonder", was published in April 2014 by Uno Mundo Press. Book three, "You're Gonna Eat That!? Adventures with Food, Family, and Friends", is available from dreamcatcherbooks.