A couple of weeks ago, one of the blogs I follow, getsetandgo, created a post about “community” with photos of an Indian festival where all sorts of people come together to celebrate–a community.  She requested others post photos of their community events.  After reading her blog post,  I decided to tell about my attempt to start a monthly “community” :

Several months ago, I reached way out of my comfort zone and started a monthly potluck.  When and where I grew up, inviting people over for a potluck was socially unacceptable.  If you invited people over, you cooked everything yourself.  If people wanted to bring something, insisted, well, ok, but otherwise, no, no, no.  Because of work, writing, and singing, I invited a number of friends over only every few months.  In September, I decided it would be far nicer to see people  more often and invited some friends over for potluck.  They asked if we could do this regularly so a monthly ritual began.  More and more friends keep asking to join.  It remains a type of hit and miss thing.  Sometimes 16 people show up, sometimes only five.  My most recent event was a week ago.  Because some of these friends are vegetarian, I invented a recipe, vegetarian enchiladas, just for them.  I also made pork roast and chicken enchiladas.  The vegetarian enchiladas disappeared quickly and everyone wanted the recipe.

Saute onions and pepper in just enough olive oil so they will not stick or become too dry.  Mix in cream cheese and spices until thoroughly blended.  Fill the tortillas, roll up, and place in an 8 inch casserole dish.  Cover with a light layer of enchilada sauce.  Sprinkle enough shredded cheese on top to cover.  Cover with aluminum foil.  Place in a 350 degree oven for 30-40 minutes.

In the spirit of the getsetandgo blog, I took photos of my friends as we talked and ate.  The enchiladas were all gone before it occurred to me that it would be nice to have a photo. 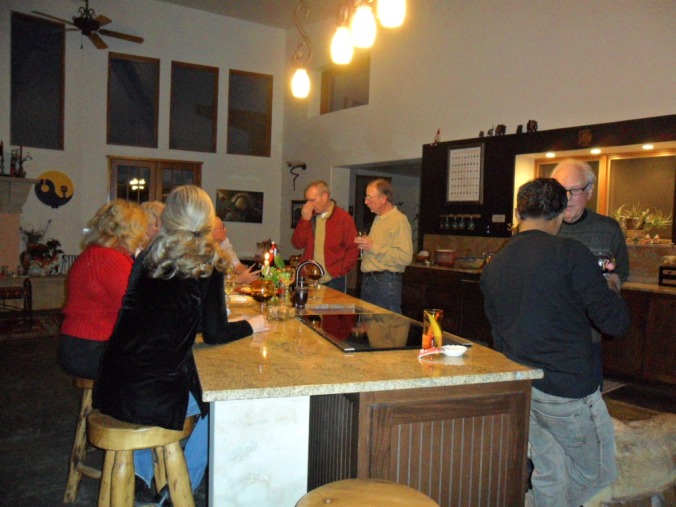 Additionally, I regretted not taking a photo of three of my women friends with long hair.  Another friend who has spectacular, very dark grey, long hair and just turned 70 recently told me a story about how a mutual acquaintance came up to her and told her no woman over 60 should have long hair.  It annoyed me so much in an odd sort of way that I now wear my hair longer than usual.

One thought on “Fun, Food, and Community with Vegetarian Enchiladas”