While I was growing up, my mom grew peonies by the side of the vegetable garden.  Red, pink, white, huge spectacular blooms that always arrived around this time of year just in time for Memorial Day.  We would pick many, put them in mason jars and take them to my father’s and her family’s cemetery plots.  She has created a metal apparatus to hold them so the wind would not blow them over.  We took water to fill the jars.  We did this every Memorial Day always.

No one lives close any more.  There is no one left to take flowers there.

My mother’s family members are buried in the Mound City, Missouri Cemetery.

My mother’s parents’ gravestone.  She was Nellie Narcissus Kaiser before she married rather late for back then–in her late twenties.  I never knew my grandfather.  He was so much older than she that even though he lived to be 80, he died long before I was born. My great-grandfather Kaiser was born in Switzerland and brought here as a child.

The gravestone of my mother’s grandmother.  I know she lived with my grandmother and grandfather a lot of the time from family photos, but I also know that she died in San Diego.  No one ever told me how she got there or why.

The gravestone of Aunt Julia, Mother’s sister.  She never married, loved fancy antiques and china.  I frequently use some of what she left me.  She came to see me rather often and we visited antique stores when she visited.  To say she was an independent woman is an understatement.

My parents’ gravestone is on the right and Dad’s parents’ on the left–in the cemetery in Fillmore, Missouri.  My grandfather, Pleasant Lightle, had walked from Illinois to Missouri as a child according to family stories.  My parents met dancing. I always smile when I see the peonies planted at their graves. 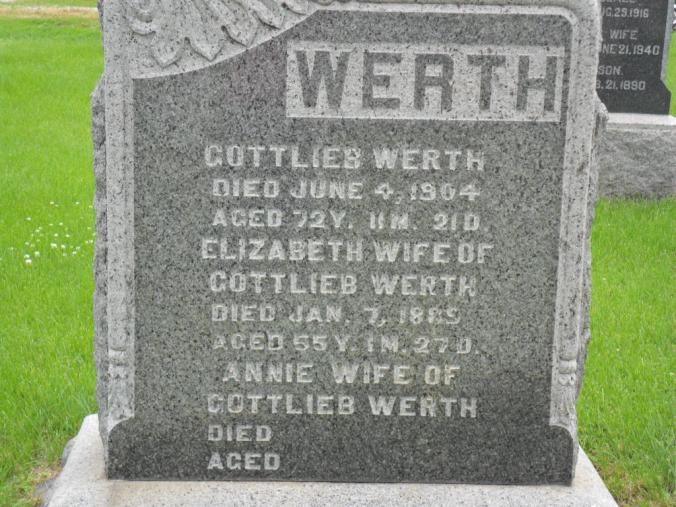 This is the gravestone of my great-grandfather, Dad’s mother’s father, who came to the US from Switzerland when he was 18.  According to my dad, he did not want to be conscripted into the Swiss army because at that time Swiss soldiers were being hired out as mercenaries.  His mother stood on the roof of their house waving until she could see him no longer.  They never saw each other again.  I grew up on the land he homesteaded in Andrew County, Missouri.  Andrew County is filled with descendants of immigrants who came from Switzerland.

The old carriage house near the house where Dad spent the first ten years or so of his 90 years.  It is all that is left standing.

The house where Dad lived the last 80 years of his life and where I grew up.

When I was a child, the building in the foreground was used at various times as a farrowing house, once for Rhode Island Red chickens, and to store various farm supplies.  When I went to visit Dad after Mom died and we were at the cemetery on Memorial Day, a man came up to Dad and asked if he was Doyle Lightle.  They started chatting and I learned that when Dad first built it during Prohibition times, he held dances there.  The sheriff would send deputies to watch and make sure no one was drinking.  I had lived there and visited there for decades and had never heard this story.

I took this photo standing on the levee next to the Missouri River looking toward the Rulo, Nebraska bridge.  This is the land my mother’s family owned.  On some Sundays as a treat, we would cross the bridge to a restaurant on the Nebraska side.  It was famous for its fried catfish and carp.

This is country with lots of water and trees.  This picture was taken near Squaw Creek National Wildlife Refuge.  Several times in my life, I have seen flooding from the bluffs on the Missouri side all the way to the bluffs on the Kansas and Nebraska side of the river.  When I was a child, my uncle and aunt lived on the river farm until a flood reached half way up the second story of their house.  They gave up and moved to town.

When I was a child, there were trees like this in lots of places on Mom’s family’s farm.  About this time of year we would hunt for morels and often pick a bushel basket full.  Mom dipped them in egg and cornmeal, then fried them.  We practically lived on them for week or two.  I was shocked as an adult to go into a fancy market and discover that dried morels were 95 dollars a pound.