Where have I been lately?  Haggling with two insurances companies.  Sixteen days ago, a woman ran a Stop Sign in a residential area while I was taking my grandson to middle school.  She immediately admitted it, the fire trucks were there within minutes (liquid and steam were spewing out of my car); the police showed up shortly as well.  About the time they arrived, a man ran the same sign and the police had to chase him down the street.  Makes one wonder what people are thinking, doing?  Texting perhaps.  Luckily, neither of us were hurt except grandson got a bruise from the seat belt and his glasses flew off.  He actually stepped out of the car and walked to school.

Kudos to my insurance agent, Lacie White of Farmers in Canyon, Texas.  I have never had an accident since I arrived in Texas 26 1/2 years ago so I called her.  She actually drove to the accident site, called the woman’s insurance company, etc.  Then she not only took me to the rental car place, but also to my daughter’s so I could unload luggage and such because we were planning to go to Dallas a few hours later.

The woman who caused the disaster received a citation.  Yesterday, I received a letter from her insurance company, Travelers, saying she might not be at fault.  Really?  She also did not have sufficient insurance to cover the value of my nearly new car, a 2017 which I bought last July.  Now I am haggling with my insurance company over its value.  This all has taken an inordinate amount of my time and energy.  Meanwhile, I have to find another car.

On the bright side, my grandson and I are fine.  I can still go to work, feed horses, and do what I always do.  However, it has delayed creativity, e.g. writing blog posts, working on my next book–already started, and starting my new handiwork project.  My last crochet project is illustrated below.  It is the blanket I made for my grandson.  For those who crochet, here is how I make it.

It is rather a creative, make it up as you go blanket, using some of his favorite colors, black, red, with a bit of grey for contrast.  As you can see I alternated colors to make each stand out.  The stitches used include single, half-double, and double crochet, made into different patterns such as shells, and a pattern where I alternated double and single crochet stitches.  My original inspiration came from patterns I found on Pinterest using many, many colors which I knew he would not like.  The beginning chain was multiples of four. The only downside of this type of pattern of alternating types of stitches is that the edges do not come out totally even and in the end I had to create a border around all four sides.  Probably blocking it would have also helped, but he wanted his blanket right after I finished it so I did not block it.  Ready to start my next project which I think will be making a sweater out of black and white granny squares, with maybe a bit of grey or red thrown in, colors left over from his blanket. 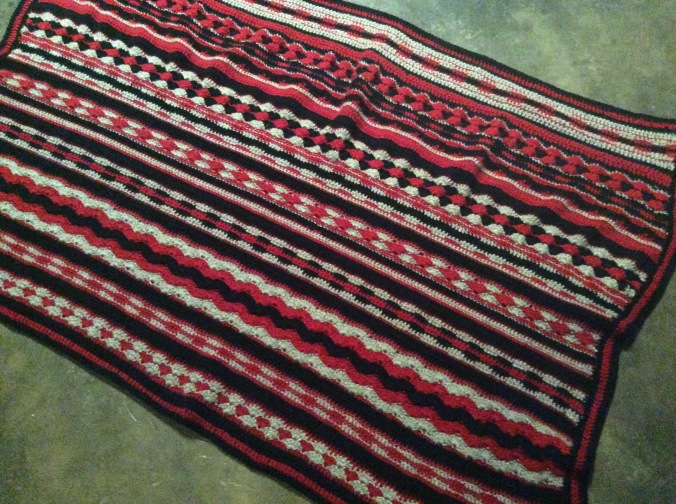 One thought on “Crashes and Creativity”