Instead of staying in the US for Christmas, my daughter, grandson, and I went to Costa Rica on a National Geographic Family Adventure for seven days and then rented a car and explored on our own for three additional days.  We arrived in San Jose a little after three in the afternoon, met the other tour members and our two guides, Jose and Josie, and headed for our first hotel, the Intercontinental.

Because the capital, San Jose, is at an altitude between 6 and 7 thousand feet, it is cool.  On the day of our arrival it was also very windy which made the air seem quite chilly.  Altitude and whether you are on the Pacific or Caribbean side are everything in Costa Rica.  High elevations are quite cool, lower elevations tropical and hot.  The Pacific side is drier, especially in the north.  The Caribbean is always wet and rainy especially in the north so the two sides are just the opposite weather wise.  Down the middle runs the cordillera, the mountains, which determine many aspects of the weather.

On the road to San Jose from the airport.  I know it says San Jose when you make reservations but the airport is not actually in San Jose or even in the same province.

The last time I was in Costa Rica it was summer here and the rainy season there–winter.  In much of the country even though it supposedly was the dry season, it did not seem very dry.  Look at those clouds. 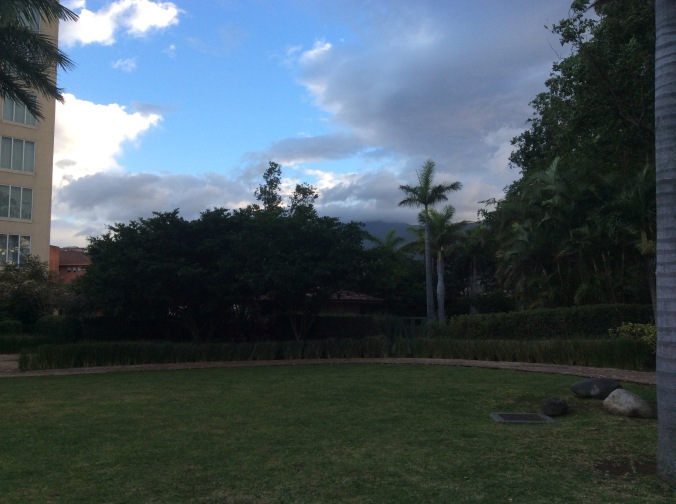 At the Intercontinental, a large, rather elegant hotel with multiple restaurants and shops, my grandson wanted to buy a plushy sloth in one of the shops.  We convinced him to wait.  The next day we found it nearly 50% less in a shop at El Mercado.

The food we had at the hotel, however, was excellent, the ceviche especially tasty.

I was quite entranced by this bench, carved out of old wood.  It is illegal in Costa Rica to harvest certain woods considered rare and/or endangered.  This includes rosewood and mahogany.  If you find pieces made from these rarer woods, it is old wood from dead trees or at least that is what it is supposed to be.  You can find beautifully made wood furniture in various parts of the country.

We spent only one night and the next morning through lunch in San Jose.

One thought on “Costa Rican Adventure-Day One”