Last weekend I went to three visit friends I had not seen in years.  These two sets of friends live in the mountains north of Las Vegas, New Mexico, a place which some people confuse with the other Las Vegas and quite to their surprise, end up in a small, quaint college town totally unlike the other Las Vegas.  While the place is always extraordinary, this past summer’s rains have infused it with an incredible endless green.

I awoke before everyone else, watched numerous species of hummingbirds through the windows then stepped out on the front and took these photos after sunrise.

Hermit Peak in the background–north of Las Vegas, New Mexico, near Rociada. 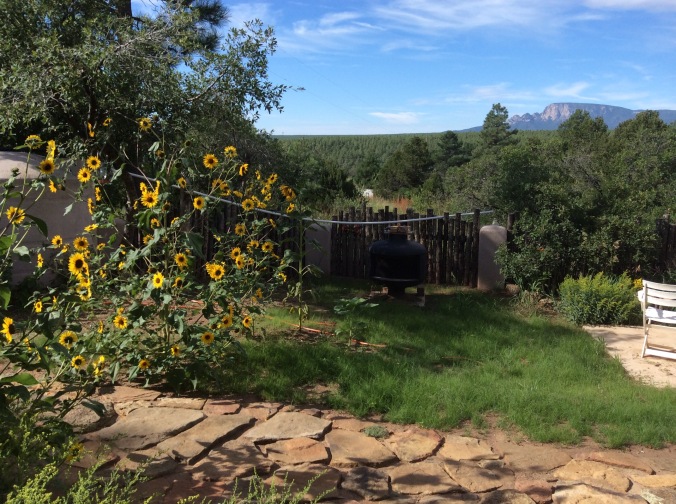 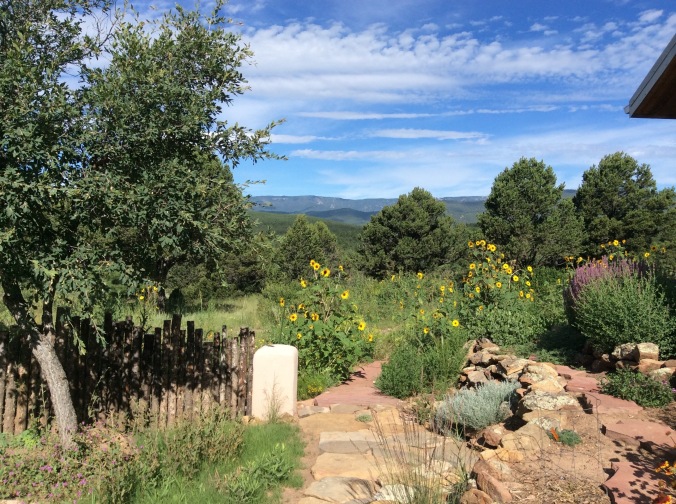 We decided to spend Saturday wandering around, visiting several wineries, enjoying the countryside. 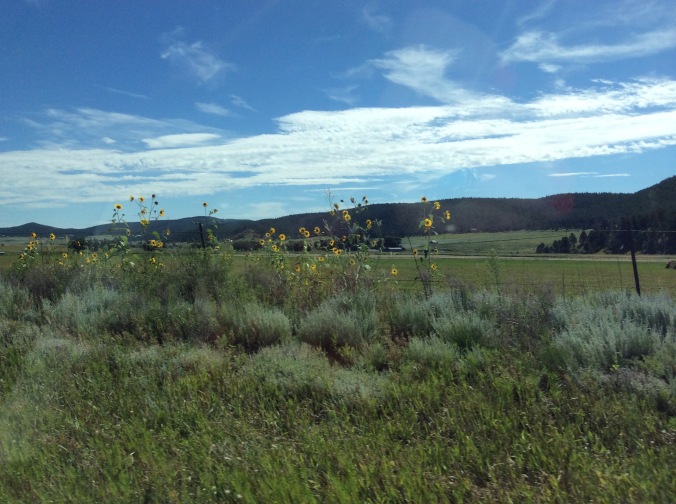 Luckily my friend who lives there drove because I would have become lost on all the winding mountain roads.  The silvery vegetation near the fence is a type of sage. 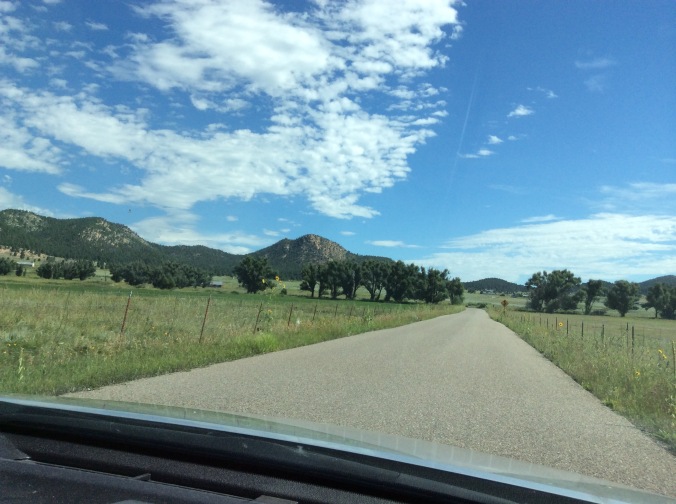 I took a lot of these photos from the passenger seat of the car as we wandered along. 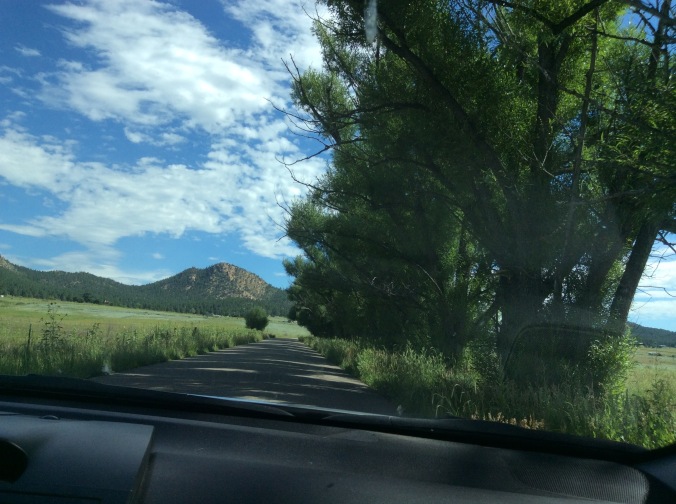 Many trees like those on the right looked partially dead.  Apparently, last year while still in a drought many nearly died but now, with so much rain this summer, they seem in recovery. 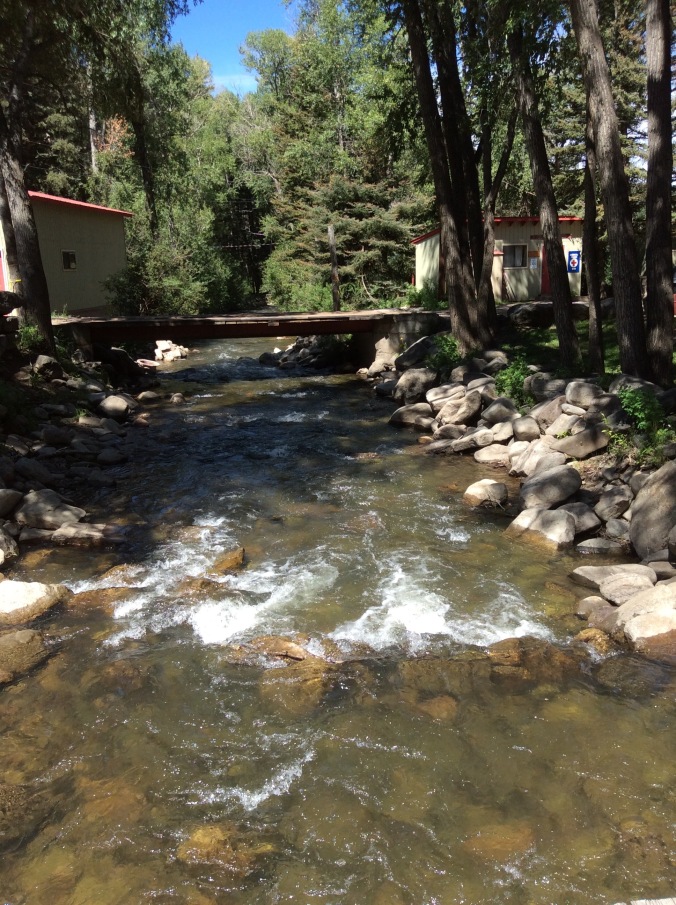 For lunch we stopped here at Sugar Nymphs, a tiny, quaint restaurant in Penasco, New Mexico.  We entered the restaurant on the side looking down this simple street to a series of what appears to be residences.

Sugar Nymphs operates on laid back time.  If you want to hurry, forget it.  After lunch we headed to our first winery, my favorite, small, hidden, grapevines growing nearly to the door and up one side of the building. 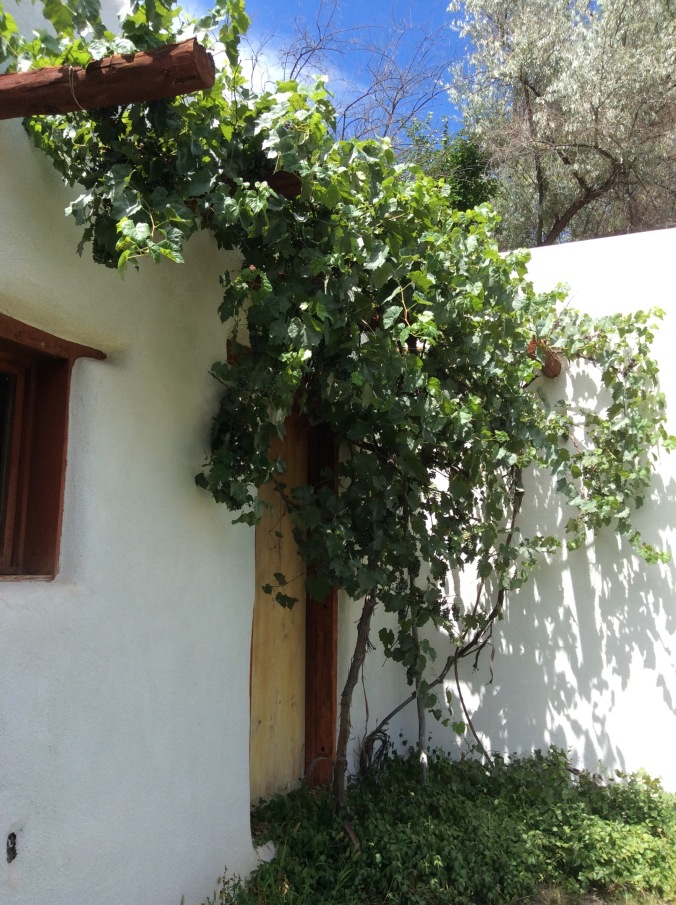 The vintner was friendly, welcoming.  I noticed grapes of which I had never heard.  He explained that approximately 6000 different varieties of grapes are grown throughout the world.  Only a minority remain suitable for wine making.  Because of  winters in this part of New Mexico, they grow varieties that can stand the cold, e.g. Dolcetto.

We dropped down altitude and arrived at Black Mesa Winery on a more heavily travelled road which goes to Taos.  This colorful fence stands between the parking lot and the tasting room and wine making facilities there.  It is a larger winery with so many people on a Saturday that we had to wait our turn.

I decided to look around and play photographer while waiting. 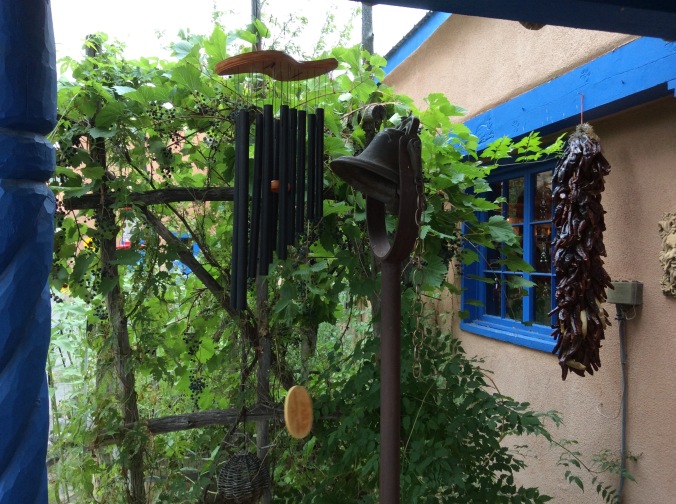 You can see tiny grapes ripening on this trellis.

I selected my two bottles rather quickly and wasted time doing this while waiting on my two friends to pick theirs.  We kept seeing rain clouds and I predicted we would get rained on.  It rained while we were there.

Our wanderings took longer than we expected so we headed to our last winery of the day.

This particular winery has a sitting area outside and snacks to order.  They sell local beers as well as wine.  Since already running late, we made our choices and left.

Dramatic storm clouds and the smell of rain greeted us as we wandered home.

2 thoughts on “Roaming the Northeastern New Mexico Mountains-Day One”