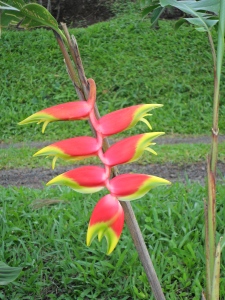 For a person who loves flowers (and I do), Costa Rica exemplifies a lush, green heaven.  This intense green makes the flowers show up more than they would in a duller landscape.  Whether in the high mountains near Monteverde or down in the coastal lowland jungles, flowers abound.  So many flowers everywhere made me want to photograph them all, but there are too many; I photographed a few. 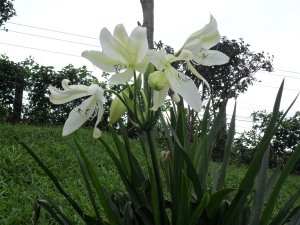 My friend, Anabel McMillen, the professional photographer, just about went nuts there were so many spectacular things to photograph.  Last count I think she hit over 1000 photographs. 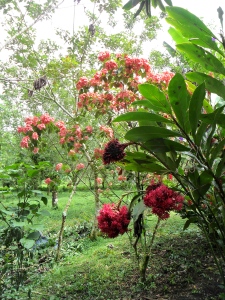 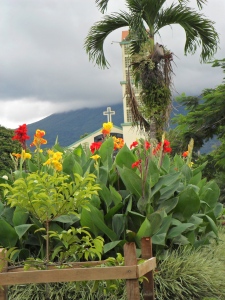 While wild flowers grow everywhere, the people also take great pride in both their personal and public gardens.  Even at the simplest country house, flowers and other plants could be found growing in profusion.  Almost all towns, like La Fortuna in the photo above and the one below near Arenal Volcano, create a public square with a church and gardens.

Hydrangeas like this one above grow along the roads everywhere near Monteverde. 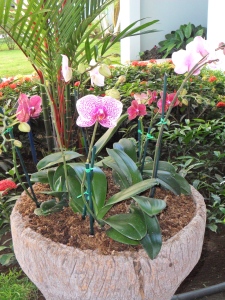 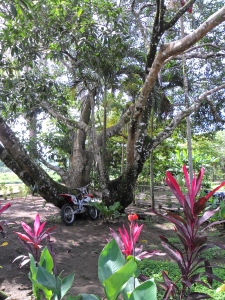 Not only are the flowers frequently much larger than the same flowers grown here, but in the lowlands, in particular, many of the trees seem huge.  Costa Rica also cultivates flowers for export.  Net covered fields of ferns grow all over the steep mountain slopes.

In the highlands near Monteverde more than one hundred species of plants can be found growing on the surface of one tree as shown in the photos below. 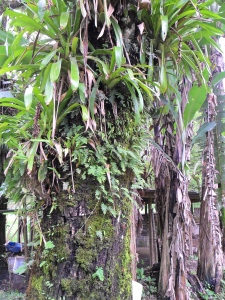 Twice we stopped at a place called El Jardin, once on the way to Monteverde and another on the way back to San Jose from the Pacific Coast town of Jaco.  In addition to their beautifully landscaped outdoor gardens, they possessed a small greenhouse filled with butterflies and a sculpture water fountain in an indigenous style seen throughout the country. 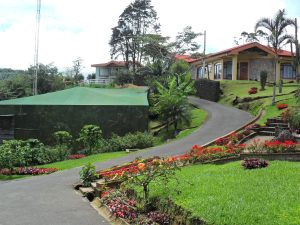 As I looked at the following bouquet where we ate lunch near the Sarapiqui River on the Caribbean side, I touched it because I remained unsure as to whether it could be real.  It was.