After a buffet breakfast of traditional foods, e.g. gallo pinto and plantanos fritos–my favorites, we headed to the central part of San Jose which is only foot traffic, no vehicles. 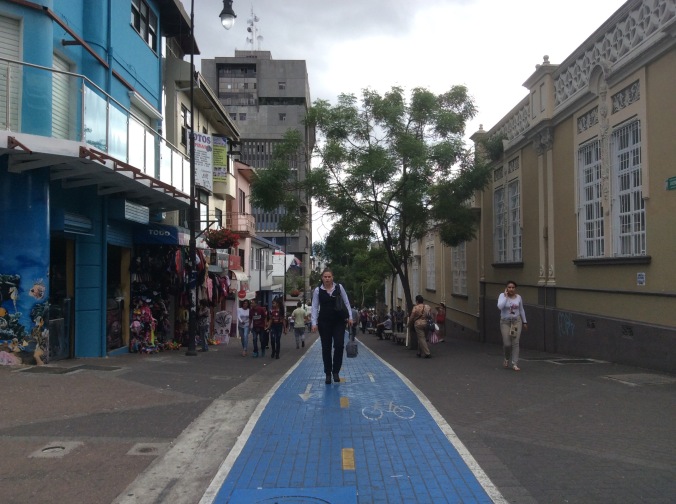 We strolled to El Mercado where my grandson bought a stuffed sloth–I love bargaining so we got it for a good price.  My only disappointment was the rush so we could see everything–the disadvantage of being on a tour. Eventually, we ended up at the National Theatre.

Located in the central section of San Jose, it is considered the finest historical building in the capital and remains relatively unchanged since it was built in 1897–it opened on Oct. 21 of that year.  Most of its opulent furnishing were imported from Europe.  At the time of its opening fewer than 20,000 people inhabited San Jose.  It was financed via a coffee tax which was then and still is the major export and cash crop.

This theatre remains in use today and houses a small, cosy restaurant next to the main lobby.  We ate our first Tico lunch there. 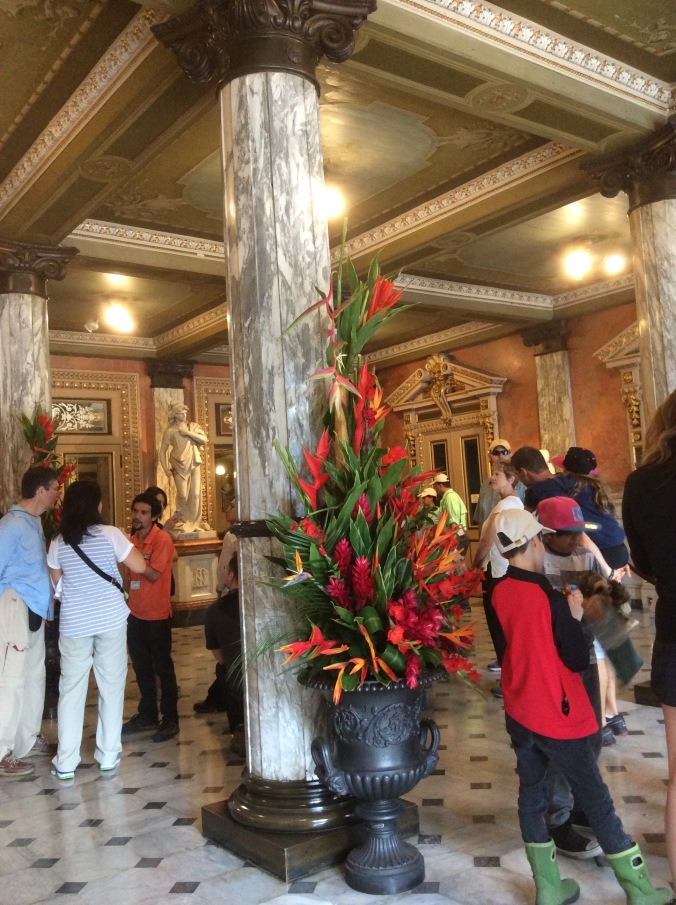 This and the following photos were taken in the lobby of this theatre. 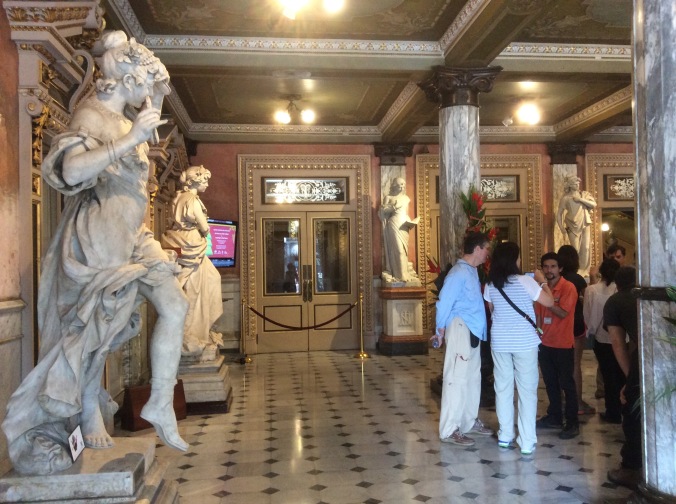 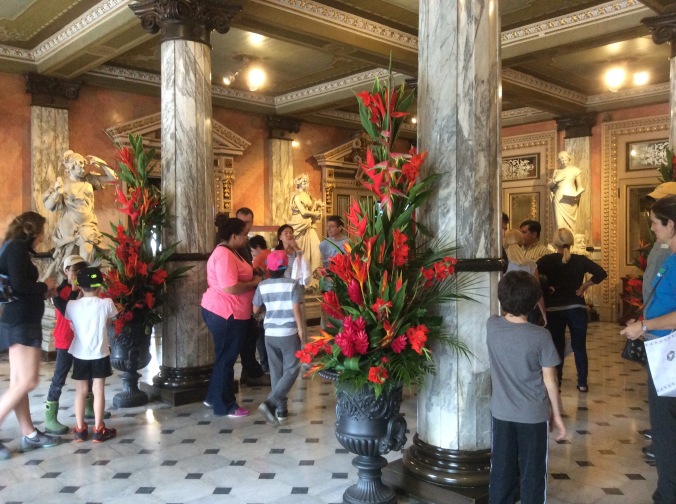 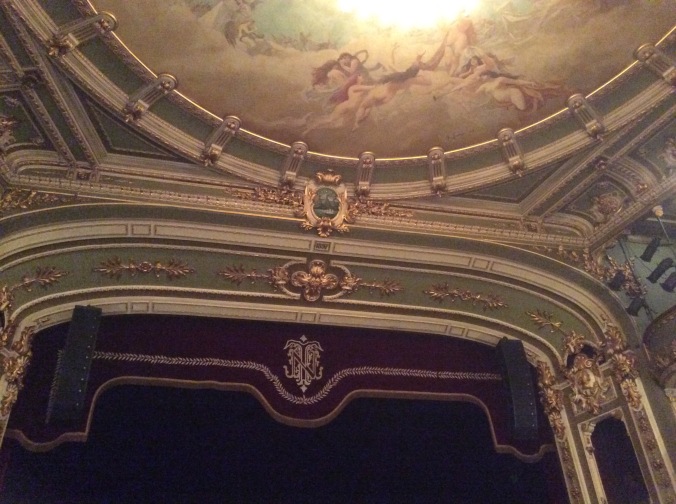 I took this and the following photo while seated in the main seating area looking up to the ornate ceiling.  Originally, the theatre was designed for multipurpose use so the main floor has seating than can be removed and the floor risen to the level of the stage and consequently transformed into a dance floor.  Rarely is this aspect used today. 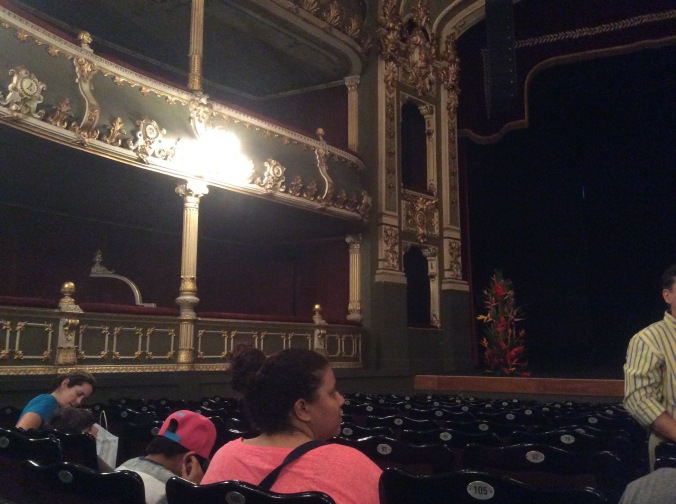 We left this area and climbed the stairs to the balcony where the president and cabinet still sit for performances.  Neither the president nor any of the cabinet have body guards.  We were reminded that in 1948, the country disbanded its army and still has no military. The following two photos were taken from the stairwell. 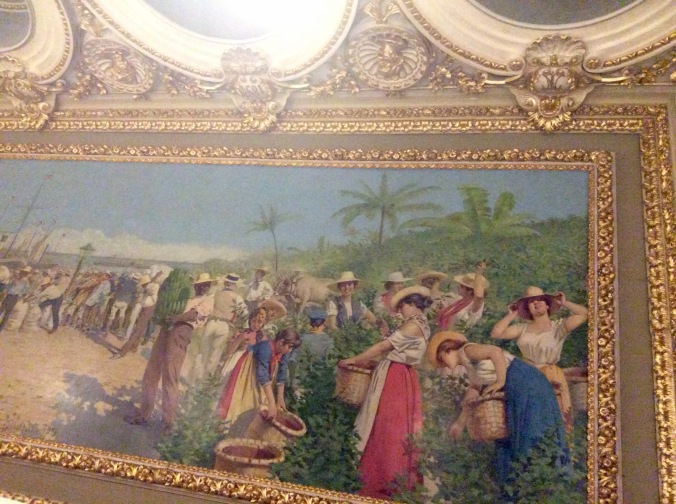 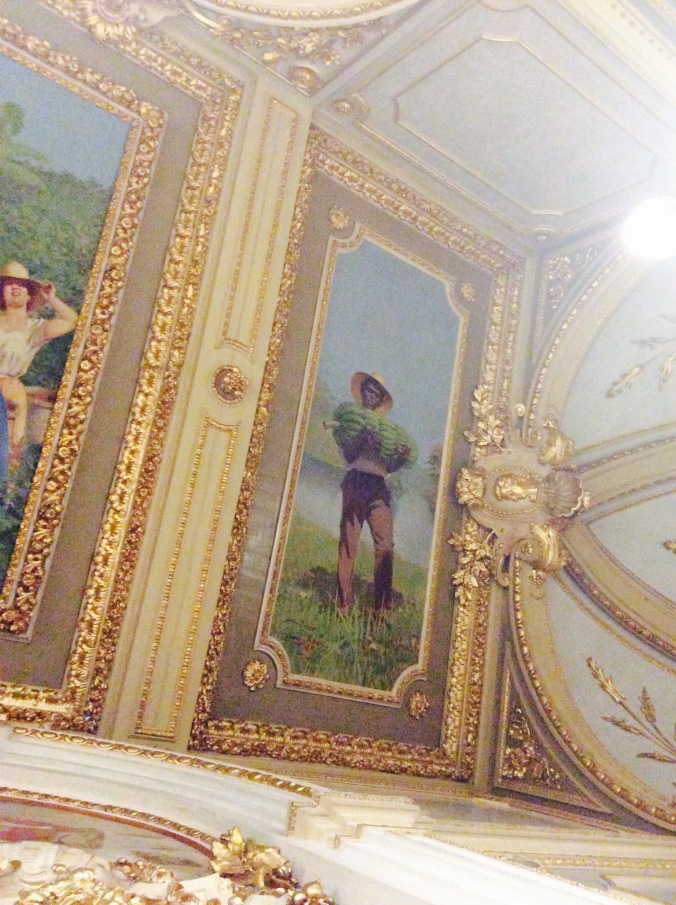 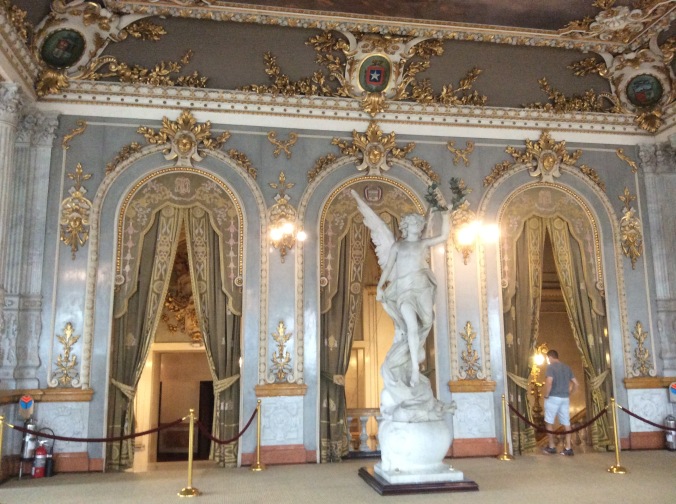 This area is a large reception room across from the balcony level.  The incredibly intricate parquet floor has been covered by carpet for protection  so you can see only portions of it as you walk around.

We also visited what is know as the Gold Museum, my favorite.  It houses a huge collection of pre-Columbian gold artifacts and other antiquities. No cameras, purses, backpacks, iPads, nothing can be taken in so no photos.  It is literally underground.  Visitors are directed to lockers in which to put all these belongings, lock them, take the key with you as you browse the incredible collection.  There is an excellent gift shop where you can purchase copies of these artifacts, painted wood jaguar heads, and other handcrafts.  This is not our typical, touristy gift job.  As a result I now own four jaguars, three heads (two from Mexico and the one I bought here) and an entire jaguar from Mexico for a total of four.