After eating lunch at the elementary school, two of us decided to go to the museum for which Canadian is famous, The Citadel.  Originally a Baptist Church, it lay in total disrepair until Dr. Abraham and his wife bought it, totally restored and converted it into their residence.  They gave it to the town as a museum and moved into another Victorian house which they totally restored.  The location of The Citadel currently contains the house, a gift shop, and another building which houses an art gallery.  First, you go to the gift shop to purchase tickets.  On this particular Fall Festival weekend, the Abrahams also open their actual residence to the public and take you on a personal tour themselves if you so desire.  Given my limited time, I purchased a ticket only for The Citadel.

This door is one of the first things you will see if you walk to the entry gates from the south of the house.  Everything remains elegant, ornate and in a style one does not often see in this part of the United States.  Canadian is an exception; fancy, old houses are everywhere.

The entry gate, looking across the lawn, provides a view of the property from front to back. Below is the face above the gate. 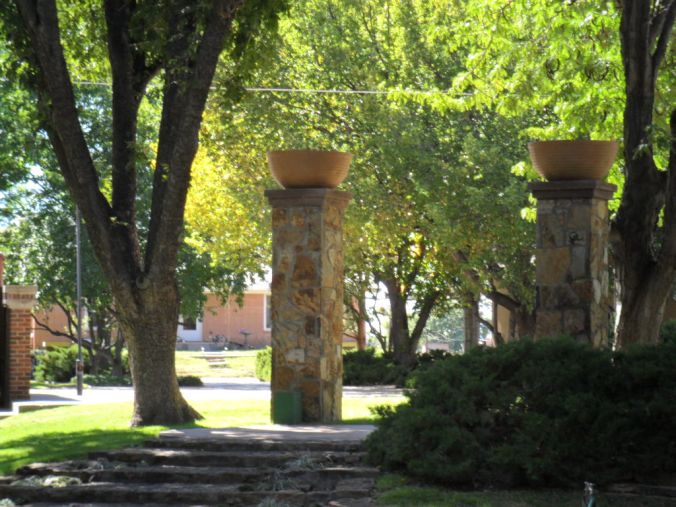 These columns stand one block back from the entry gate.  The property equals one square block.  This quotation is inside the entry gate to the left.

After buying my ticket at the gift shop, I headed to the museum and found the current show astonishing, impressive, and frequently hauntingly sad.  The entire gallery houses the photography of one person, James Mollison.  This young man decided to go to various countries taking photos of children and their bedrooms.  The complete collection was available for purchase in a book with details about the author’s interviews with all the children he photographed.  I bought one for my grandson.

Although some of the photos showed children with beautiful bedrooms, living in relative ease and occasional opulence, most of the children lived in squalor or had no place to live at all except the street.  The boy below lives in Nepal. His entire family live in this room.

The boy above lives in Cambodia.  They live in a shack above a river. When it rains a lot or flooding occurs, they have no place to go and everything floods.  The river provides water, food, washing, everything.

This boy in Brazil lives and sleeps on the street.  If he is lucky, he finds a sofa outside on which to sleep.  To eat, he has to steal.

Living in Italy remains anything but easy if you are Roma.  Although he has a family, they have no place to live so sleep on this mattress outside, the entire family.  Harassment necessitates frequent moving.  They live in a constant state of fear and desperation.

From a tribe in the Amazon, this youngster actually lives with family and they do have a place to live.  However, modernization and the drive to harvest the various natural resources there threaten their traditional life and homeland.

After leaving the art gallery I headed across the lawn to the house, taking photos along the way.  This fountain is in a small side yard, just inside the gate.

Once in the house, you can take photos but unfortunately with no flash.  Without a fancy camera, I gave up the idea of photography while in the house and just enjoyed the beauty of the art, the furniture, the exquisite rugs, one of which especially caught my eye.  I love rugs and own a few from Iran, Afghanistan, Egypt, and a couple of Zapotec runners.  I am especially fond of rugs from the Middle East and know a little about them,  sometimes roaming  around rug shops for the joy of rug viewing somewhat like going to a museum to look at the art.  However, never have I seen a rug anything like the one that lay before me.  Entranced, I stared in awe.  First, the rug was huge; it filled the entire master suite.  In the center a shepherd and sheep stood with lions, deer, and various other animals around the border.  I found one of the ladies helping with tours; she knew nothing about the rug and sent me to the lady in the gift shop.  She didn’t either and told me to go down the street five blocks to where Dr. Abraham currently lives and ask him.  I informed her that I did not have a ticket to tour there and tour time was running out.  She told me to go anyway.

Mrs. Abraham provided a warm greeting. I explained I was ticketless and had only come to find out about the rug.  She told me an identical rug had been in the house where her husband grew up. However, the rug at The Citadel was not that rug.  Dr. Abraham’s brother  inherited the original rug when their father died.  She indicated they had bought the rug at an auction.  For more specifics, she instructed me to find Dr. Abraham in the kitchen.  When I found him, he was explaining to others about the tiles. I waited. He seemed delighted with my interest in the rug and told me about it.  His family was originally from Lebanon.  An identical rug was, indeed, in the house where he grew up.  In fact, he and his siblings used the rug for games they invented, hopping around from animal to animal. By the time his father died, the rug had become quite worn from all this use and his brother did inherit it.  Dr. Abraham loved the rug and was delighted when someone told him that they thought a similar, if not identical, rug was to be auctioned off in New Orleans. He went to the auction and purchased the rug which is in much better condition than the one from his childhood. He told me he knew little about rugs, but was quite sure he had been told it was from Damascus.  Since the trip to Canadian, I researched rugs a bit,but cannot find the origin of this rug.  I intend to keep trying.

All this exploration with the rug caused me to leave Canadian considerably later than planned. The drive from Canadian to Miami, Texas, provides somewhat dramatic scenery typical of much of the west with an occasional richness of trees and green quite unexpected and delightful.  The following photographs were taken during this drive.

The Canadian River with the bluffs on the other side.

It appeared as if someone had built a cairn at the summit of this odd little hill.  In the middle of nowhere, who could I ask.