After leaving the US on July 2, flying 14 hours to Dubai, spending a day there, I finally made it to Addis Ababa (also spelled Abeba) on the 4th.  I remained in Ethiopia until this past Monday when I left Addis late in the afternoon.  Blog posting from Ethiopia was limited because wifi is available only in certain areas and places and there is no 2,3, or 4G anywhere.  For those of you who saw my four posts from Ethiopia, some photos and a few details may be repeated.  My plan is to post photos and detailed information now that I am back which will require a number of posts because not only did we go on a ten day road trip, we also spent time in Addis Ababa and Adama (Nasret).

I went on this trip with two friends, a couple.  Dino is from Ethiopia, having grown up in Dire Dawa.  His parents now live in Adama where his father owns and runs a printing press.  Two of his sisters and one brother live in Addis.  We spent the first few days before our road trip in Addis, staying with his sister, Anna, who owns a painting company.  She imports the paint from Italy and her clients include individuals and businesses.  Her company also paints cars.  Of course, she painted her own house with this paint.  I loved the colors and textures. 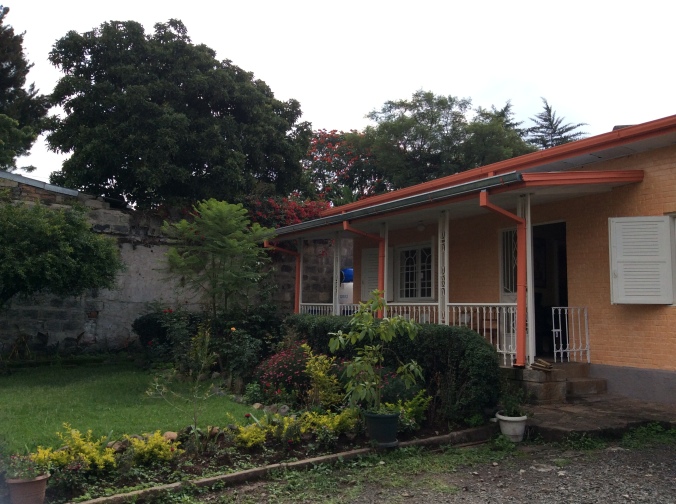 The front of Anna’s lovely house.  It is the rainy season and flowers grow everywhere. 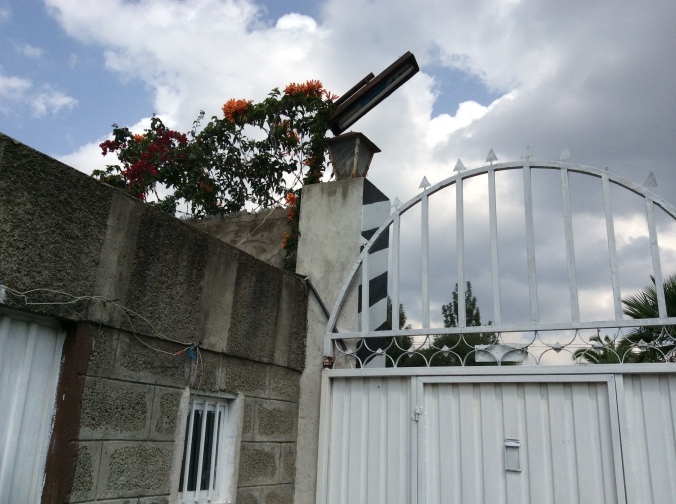 The translation for these orange flowers, which I had never seen before, is flowers of the sun.

One afternoon four of us decided to take a drive around Addis to see some of the more beautiful spots which mainly included the Addis Hilton Hotel and the Sheraton, which is a five star.  Carlo, Dino’s father drove.  What a remarkable man, in his 80s and still getting to work at 6, driving everywhere.  The Hilton is the older of the two.  The grounds of both display lush greenery.

Zuriash and I enjoying the grandeur.

Papyrus by the pool at the Sheraton.

The swimming pool at the Sheraton.  You cannot use it unless you are staying there.  However, the pool at the Hilton is available on a membership basis–you do not have to stay there to use it.

The rooms at the Sheraton overlooking the gardens and pool.  Dino and Carlo, son and father, walking down the path to the pool area.  Apparently, many visiting dignitaries stay here.  Inside walls are filled with excellent local art.

And then there is Addis traffic.  Approximately six million people live there.  In five or so days, riding here and there all over the city, I saw only two traffic lights, neither of which worked.  Most large intersections contain a traffic circle and around and around you go trying to wiggle into a space and get across the intersection.  Take a look. 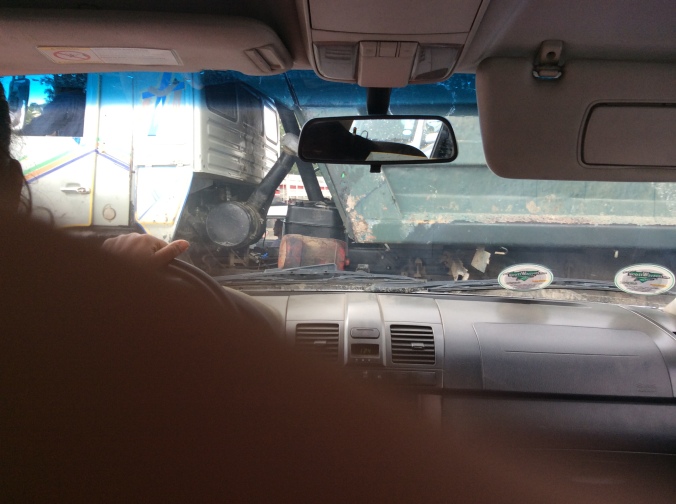 Trying to drive to Guiseppe’s house, Anna driving, we were stuck here.  The big trucks would not let us through.  Finally, a guy in another car, got out, stopped the trucks and waved us on.  It took us 1 1/2 hours to get there.  A couple of days later, he came to Anna’s in twenty minutes.

In front of Guiseppe’s house.  A typical residential street, sometimes like this one with gates on each end.  People hire someone to watch the gates.  You honk and they are opened and then closed. 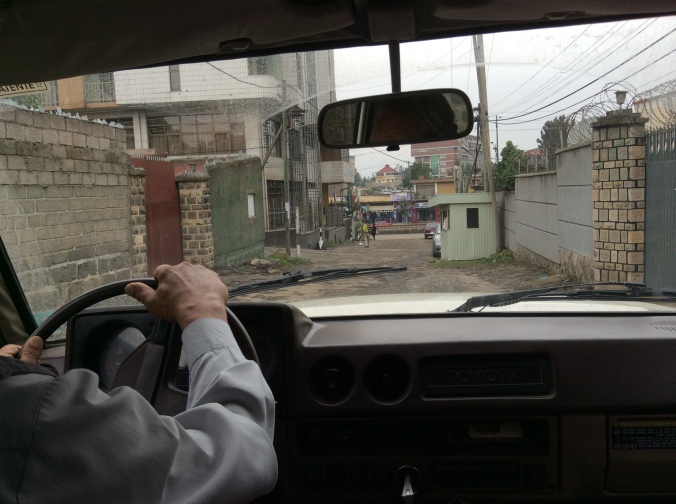 On the last evening before we began our ten day road trip, Anna took us to a cultural restaurant to eat traditional food and watch the dancing from different parts of the country.  I expected it to be just a tourist spot, but no, many locals were there.  During the dancing, locals competed with the professionals to see who could dance the best.

This dance requires almost no motion except a lot of shoulder action.  I attempted to do it myself when the man behind the girl in white came over and asked me to dance.  I tried but would have to practice forever to get this one right.

The young men in the background competing.

Anna and I in front of her house.  She is wearing a traditional Ethiopia dress.

Raised on a family farm in Northwestern Missouri, I became a singer, college administrator, corporate manager, educator, and author. My first poem was published in a statewide anthology when I was in high school. I am a former member of the Board for the Story Circle Network, a group of women dedicated to women telling their stories. I have a Ph.D from The Ohio State University and a B.A. and M.A. from the University of Rhode Island. Currently, I teach high school English and Spanish, sing, write and raise horses in the Panhandle of Texas. My memoir in poetry "On the Rim of Wonder", was published in April 2014 by Uno Mundo Press. Watch for book three, "You're Gonna Eat That!? Adventures with Food, Family, and Friends", later in 2019.